At long last, here we are, on the verge of being caught up!  Very exciting.  I wish I'd been able to find a way to get these reviews out in a more expedient fashion, but, alas, I failed to do so.  Be that as it may, the time to shout Skyfall is here at last.
When last we visited the Bond series, it was via Quantum of Solace, a film that divides Bond fans to this day.  A great many people consider it to be woefully inadequate when standing side-to-side with its predecessor, Casino Royale.  I can't claim to be entirely exempt from those feelings; I don't think Quantum is as good as Casino Royale.  Despite that, I think Quantum of Solace is a very good Bond film.
And whether it is or it isn't, here's an important fact to keep in mind: it was just as big a hit as Casino Royale was.  It made about three million dollars less at the worldwide box-office, which is so slim a dropoff as to be statistically nonexistent.
You Only Blog Twice is not focused on the commercial aspects of the series, necessarily; but I do think it's important to remind people that Quantum was a worldwide success.  As such, it set Skyfall up for even greater success, as did the release date: late in the year 2012, which just so happened to mark the fiftieth anniversary of the Bond film series.  The occasion was marked with a great deal of hullabaloo, and why not?  No series of films -- somebody correct me if I'm wrong about this -- had ever gotten to be fifty before.
One big part of that celebration was James Bond's appearance in a short film that was broadcast to the world as part of the 2012 Summer Olympics, held in London.  In this short film, Bond escorts his most notable leading lady ever to the event: 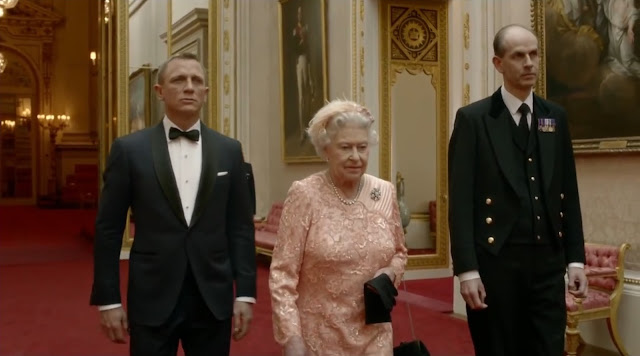 It isn't just any character who is chosen to appear on film with the Queen of England.  This was an enormous moment for both Daniel Craig the actor and James Bond the character, and if one was of a mind to do so, I think one could make a persuasive argument that this was the single most important moment in the history of the series.
None of that has anything to do with Skyfall, of course, except as one bit of explanation for why it went on to become the top-grossing film in the entire history of the series.  It seemed well worth a mention, though, and if anyone wants to have a conversation about whether this short film is canon within the Bond series, I'll happy to oblige in the comments.
Skyfall, in some ways even moreso than Quantum of Solace, is a film that tends to make old-school Bond fans turn up their noses.  Let's find out what You Only Blog Twice makes of it.