On today's agenda: the 1990 television film Spymaker: The Secret Life of Ian Fleming, which was the second such biopic in as many years.  The Internet seems to be lacking when it comes to details on the film's production, place of initial airing, and so forth.  From what I recall, I saw the movie on TNT -- under the title The Secret Life of Ian Fleming (no Spymaker in evidence) -- and since the back of the DVD claims it was a TNT Original, I suppose that clears up at least that much of the origins.

I'd like to draw your attention to the way Spymaker is being sold in that artwork.  "All the excitement of a Bond movie," claims the blurb on the back of the DVD.  "CONNERY," trumpets the front.  (I especially enjoy how much smaller the word "Jason" is than "Connery."  I choose to read that as "Jason CONNERY," for the record. It's fun.  Try it at home!)

I mention this as a means of illustrating a point: in terms of its marketing, if not in terms of the actual content of the film, Spymaker was sold as a quasi-Bond film.  It comes close to outright pandering.

We're going to do this the same way we did the 1989 biopic Goldeneye, i.e., I'm going to offer up a plot summary with extensive screencaps, and then hastily score the film on the Double-0 Rating system, just for a larf.  Because I won't be forgetting that blurb; "all the excitement of a Bond movie," it promises.

And now for something completely different...

Today, I've got a look at Goldeneye, the 1989 television movie in which Charles Dance starred as Ian Fleming.  This, obviously, is not a James Bond movie, and so it is, strictly speaking, somewhat outside the boundaries of this blog.  Nevertheless, I thought it might be fun to have a look at, since it is -- again, obviously -- of tangential relation.

Easier said than done!  The movie -- which you will sometimes see referred to as Goldeneye: The Secret Life of Ian Fleming or Golden Eye (although the on-screen title is merely Goldeneye) -- has never been released on commercial DVD, and is difficult to obtain on VHS.  YouTube will not help, you, either; nor Netflix, nor Hulu, nor Amazon Prime.  There doesn't even appear to be a torrent for the movie...and when the pirates haven't figured out a way to upload it, you know you're talking about some obscure stuff.

In trying to find a copy, however, I did eventually prevail.  At some point, evidently as part of some 14-part series of alleged ACTION THRILLERS, the Daily Mail evidently did a DVD for the film that they included as a supplement for subscribers!  Some kind soul on eBay had one of these up for just a few bucks -- or pounds, technically -- and so I bought it and had it shipped across the Atlantic.  So, one problem down. 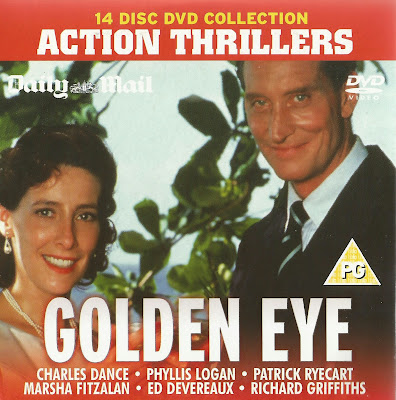 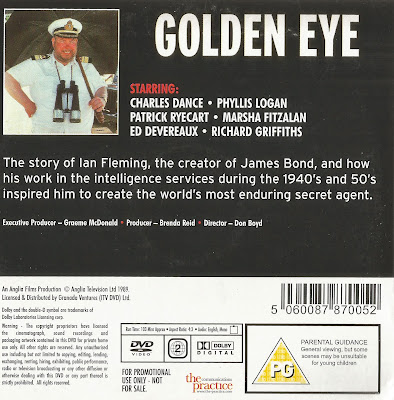 Second problem: the DVD is Region 2.  I've got nothing that will play a Region 2 DVD.  So I did a little research to find out how one could rip a different region's DVD, and found that my laptop will allow me to change the region code for a limited number of times.  I changed it to Region 2, ripped the disc in four parts, and that was that.

Except, it wasn't.  Of all the programs I've got, only VLC Media Player will actually play the files that I ripped off the DVD.  And it will only play them spottily.  It's prone to crash every few minutes (especially when pausing and doing the other sorts of things that are a necessity of screencapping images), and the audio occasionally goes glitchy, though rarely in the same place twice.  Very weird.

I say all that as a means to illustrate just how devoted I was to the idea of seeing this movie and passing along knowledge of it to readers of this blog.  In this case, it actually took a bit of doing.