For most of my life, if you had chanced to run into me on the street one day and stopped me to ask what my least favorite James Bond movie was, I'd have probably answered The Man With the Golden Gun.  That's changed over the past decade or so, as a quartet of other titles -- two that (the 1967 Casino Royale and Diamonds Are Forever) have been covered here already, and two (Never Say Never Again and Die Another Day) that won't come up for a while yet -- crowded it out at the bottom of the barrel.

I've been simultaneously dreading and anticipating this rewatch of Golden Gun, because I was very curious to see what my rating system determined.  I figured it was entirely possible it could reclaim its cellar-dweller status, or at least get close to it.

What I didn't expect was to discover myself enjoying the movie for perhaps the first time ever.  In retrospect, I'm not sure I ever paid all that much attention to the movie.  When I was a child, the movie confused me, partially because I somehow never managed to see it all in a single sitting, but also partially because the plot during the first act is more complicated than is typically the case with Bond movies.  In later viewings over the course of the next few decades I always mentally checked out when this movie came up in my Bond-viewing rotation, and I recall skipping it more than once; another time, I remember fast-forwarding through whole chunks of it.

In other words, I seem to have managed to make it all the way to 2012 without ever giving the movie its proper due.  Here, I think you will find that that mistake has been corrected.

This is not to suggest I have uncovered some sort of hidden masterpiece; that is not the case.  The movie has numerous problems, several of them quite severe; but it also has several extremely strong elements, and while it is still not going to make it onto a list of great 007 films, I can now definitively say that I like the movie.

Funny what reappraisal will do sometimes, isn't it? 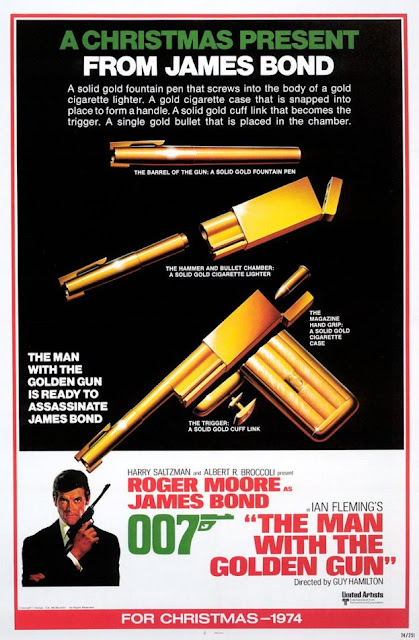 The producers successfully reinvigorated the James Bond series with Diamonds Are Forever, but much of that movie's financial success seemed to be due to Sean Connery's return to the role of 007.  He had returned only for the one film, though, so despite the breathing room that return provided, the producers were once again in the unenviable position of needing a new leading man for their series.

They apparently flirted with the idea of Burt Reynolds -- Burt Reynolds! -- in the role, but eventually settled on Roger Moore, the former start of the hit television series The Saint.

Audiences responded, and worldwide the new movie was an even bigger success than Diamonds Are Forever had been.

How will it fare when faced with the Double-0 Rating system, though? 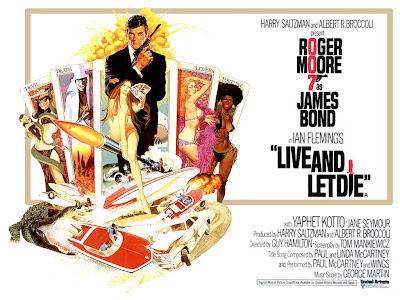 Let's find out.  It surely can't be worse than Diamonds Are Forever, the current cellar-dweller.  Can it...?

On Her Majesty's Secret Service was a box-office disappointment (it performed reasonably well worldwide, but in America brought in only about half of what the previous film in the series You Only Live Twice, had done, and about a third of the earnings of Thunderball before that).  As such, producers Albert R. Broccoli and Harry Saltzman scrambled to make a recovery, lest the franchise as a whole go down the toilet.

Amazingly, this led them to hire an American actor for the role.  John Gavin was actually signed and ready to go, but then fate intervened and provided an opportunity for Sean Connery to return to the role he had made famous (and vice versa) for one final fling.

I may as well tell you now: this is perhaps my least favorite film in the entire series, so if you happen to be a big Diamonds Are Forever fan, this may prove to be bumpy going for you.

I suppose we'd best get it started; soonest begun is soonest finished, and all that. 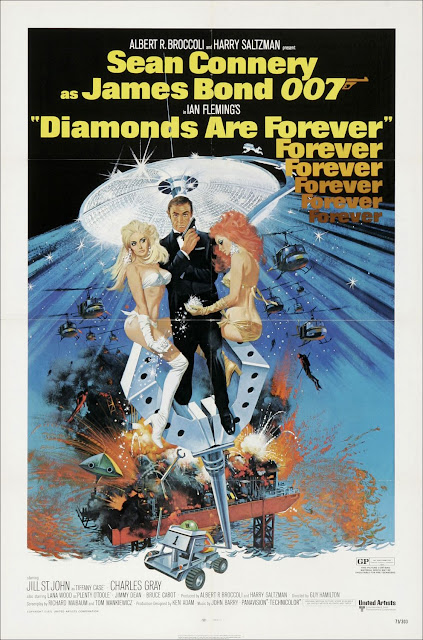 Going into this project, if you asked me what my favorite James Bond movie, I'd have told you it was either On Her Majesty's Secret Service or Thunderball, depending on what side of the bed I woke up on that morning.  One of the things I've been most curious about in using this Double-0 Rating system is to find out whether that opinion would be reflected by the scores I assigned.

After blogging the results up to this point, Thunderball currently holds the lead spot.  So where will On Her Majesty's Secret Service fall?  Let's find out. 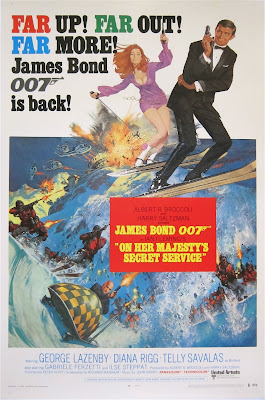 (1)  Bond ... James Bond
The general public probably still thinks of On Her Majesty's Secret Service (to the extent they think of it at all) as "the one starring that one guy who never showed up again."  This is simultaneously understandable and unfair.  After all, the Bond series as it has developed over time has featured several actors who have been inextricably linked with the role for a period of years, and so people can be forgiven for not quite remembering who George Lazenby is.  On the other hand, is that reason to dismiss him?